The term “Mediterranean Diet” usually refers to the dietary pattern met in Mediterranean’s populations around 1950s and 1960s. These dietary habits attracted much interest because people following them had extremely low rates of coronary heart disease (CHD) and mortality. More specifically, after comparing olive-growing regions of Southern Europe with regions of Northern Europe and the United States, scientists observed that the latter had higher CHD rates and sorter life expectancies. Research conducted, after these observations made, focused on determining which components of the Mediterranean Diet are responsible for its beneficial effects on human health. 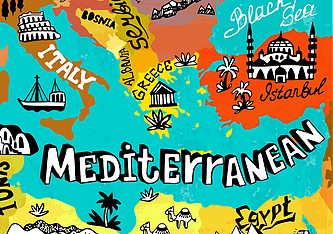 The first extensive study on the Mediterranean diet was the Seven Countries Study, and it was conducted from Ancel Keys in the 1950s. The countries participating were USA, Finland, Yugoslavia, Japan, Netherlands, Italy, Japan and Greece. The results of the study showed that the consumption of fat in these countries was remarkably high –approximately 30-35% of daily energy consumption- but their food sources and consequently their quality were much different. In USA and Northern European countries dietary fats received mostly from animal sources as saturated fat. In contrast, Mediterranean countries consumed more plant foods rich in unsaturated fat with olive oil holding a predominant place in their daily diet. More recent studies found a positive correlation between CHD and dietary saturated fats and at the same time a negative association of CHD and unsaturated fatty acids.

It must be noted that the beneficial effects of the Mediterranean Diet on human’s health can be observed only if the adherence to the dietary pattern holds for a long time. Short-term or partial devotion to the diet isn’t sufficient to improve the quality of life. There is abundant evidence in bibliography supporting the notion that Mediterranean Diet is capable of lowering the mortality rates of a population.

At first the design of the pyramid was conceived in order to picture the qualitative characteristics of the Mediterranean Diet in daily, weekly and monthly basis. At the base of the pyramid are foods that should be abundant in every day’s diet and provide most of the daily energy intake. Such foods are of plant origin and include fruits, vegetables, cereals, nuts, legumes, seeds, olives and olive oil. 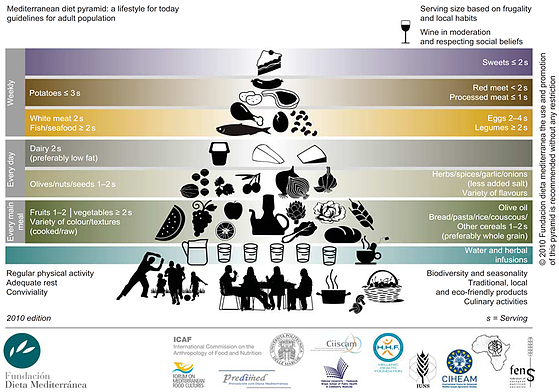 At the higher levels of the pyramid are foods recommended to be consumed in moderate amounts. In this category are foods of animal origin and products containing high portions of fats and sugars. This dietary pattern which is mostly plant-based consists of moderate intake of seafood and fish, and moderate to low intake of eggs, dairy products (milk, cheese, yogurt) and poultry.

In 2010 the new Mediterranean pyramid was presented by the Fundación Dieta Mediterránea which used all the scientific knowledge for the health benefits of the MD and was advanced in order to contain the new way of life. Therefore, it is focused on methods of cooking, selecting foods and conditions of eating them. The key cultural elements included in the new pyramid are conviviality and socialization, moderation and frugality, cooking procedures, physical activity and also seasonality and locality of products.